Although I have been back in Oz for a couple of weeks it has been lovely to see some of my recent work in a number of exhibitions in Reykjavik.

The artists doing the residency with SIM this July had a show titled Window Weather at the SIM Gallery late in July. Although I was not able to be there, I was still able to submit some work, including a new AR work which can be activated using Aurasma and following the “Words for Water” channel.

Here are some other images from the Window Weather exhibition.

Out of a random visit to a tourism office in Reykjavik came a chance meeting with a like-minded artist Aishling Muller. We had a great conversation and connected on themes related to nature, the seasons and earth based spirituality. Aishling’s website at Hear the art Heart: EARTH has some wonderful examples of her work.

When we met, Aishling was also preparing for an exhibition titled Elemental. Part of the focus of her show was to engage the audience to participate in the exhibition. the audience was asked to bring in something from nature and include it as part of the show. Aishling invited me to contribute, so I made another set runes from stones found at Govnik beach. 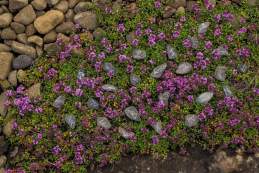 What is really exciting is that this chapter has not ended. Aishling has collected my work from SIM and later in the year she will be returning the runes to the beach and documenting the process. We also plan to collaborate on other projects, something I really look forward to, so watch this space!