I found this post really valuable for work with user research as part of bytetime media so I reblogged it for sharing as well as for future reference.
Link: https://uxdesign.cc/create-a-user-research-lab-on-any-budget-f92221dc8210

Picking a method for a user research study should be guided by ‘what information do the team need to know to make their next decision’. For many research objectives, the right method will involve bringing participants in for live sessions — this is common for usability testing or other methods where the context of where and how a user uses the software isn’t being evaluated.

A research lab is a space dedicated to running these studies — prepared for the efficient running of research studies, with all the equipment needed. By having a dedicated space, the time and effort needed to set up each individual study are reduced, increasing the velocity of the research team, reducing the opportunities for things to go wrong, and allowing the researcher to focus their attention on the design and moderation of their studies.

Some of the things a research lab will be set up to do include:

Building a research lab requires the permanent use of a room in the organization’s office, in which to put the equipment. The ideal room will be decorated neutrally, with good lighting and the ability to control the temperature of the room. It will also be somewhere easy to access from outside, so that participants will not have to come in via the back, with the rubbish bins. However, finding rooms in organizations can often be difficult, so compromises will have to be made.

The cost of equipping a research lab can scale from under £500, to millions of pounds. We will cover three different setups, suitable for a range of budgets. One approach might be to start with the cheapest option and scale up to the more expensive versions as the demand and interest in user research increases within the organization.

This article contains extracts from the book Building User Research Teams, which covers all of the steps required to build and equip a new user research team.

It is possible to make a setup that can capture audio and video, and stream it cheaply, based around a single laptop device.

A simple usability testing setupThe equipment in this setup is:

In this setup, the laptop is used as both the test device and the hub for recording and sharing. By connecting an external monitor, keyboard and mouse to it, the participant will be able to use it as-if it is a desktop computer. Meanwhile, the laptop’s screen will mirror the monitor and allow the moderator in the room to see what happens on the screen.

The software Obs is free and allows a variety of video and audio feeds to be mixed and recorded to the same video file. This allows the moderator to record both what happens on screen, and the webcam capturing the room video and audio into a single video screen, to be analyzed later.

Google hangouts will then allow the Obs window to be streamed to other viewers, such as the note-taker or the product team by setting the laptop as the presenter and sharing the Obs application. This will only work while Obs is not minimized, so drag Obs off-screen during the session so it does not disrupt the participant.

If testing mobile devices, there is software that can mirror what happens on the phone to the laptop, which can then be added to the video captured by Obs. Quicktime on Macs will mirror iOS devices and is free, but PC paid for alternatives do the same — Vysor if testing Android devices, Apowersoft if testing iOS devices. Apowersoft works without a wired connection between the phone and the laptop, which can be particularly helpful.

Combining this mobile feed with a cunning overhead placement of the webcam will capture what the person is pressing on the phone, in addition to what the phone screen is showing, and can be useful for identifying when participants press inactive elements. With slightly more effort mobile ‘sleds’ that mount the camera can be purchased which mounts the overhead camera to the phone, improving the quality of the video captured from it — one of which we will look at in the mid-range setup. When on a budget, it’s possible to build your own sled — here is a guide from Harry Brignull on how to make one for under a fiver.

This setup is very cheap — particularly if the researcher already has a laptop. However, it has some limitations that mean a research team may want to upgrade to a better setup. This setup is heavily reliant on the laptop as both the test device, streaming, and recording device. This may impact the performance of the laptop, and if it breaks, the entire setup is lost — making it hard to resolve issues that might occur during a session.

The streaming of the session is reliant on Google Hangouts, which will be routed through the internet before it reaches the viewers. This puts it at risk of video quality being degraded, or complete failure, based on the speed and quality of the internet connection available. An outage from Google would also prevent the research session from being streamed, which would be difficult to anticipate or mitigate.

Picking up good quality audio from a webcam will also be difficult with this setup. The microphones on webcams are often optimized for someone directly in front of it — in research sessions, the participant may move around more than anticipated, and audio will be lost which will be frustrating for viewers and mean notes from the session are lost.

This budget setup is often a good start, for organisations who are at the start of building a research team and need to demonstrate the value of running studies quickly. It is also a setup that could be constructed from equipment that is laying around anyway, useful in organisations where procurement and purchasing can take months. However, once research is occurring regularly, the limitations of this setup will start to cause technical issues, admin overhead, and additional complexity that an efficient team will want to minimise. This is when an organisation might consider investing more in a research setup. 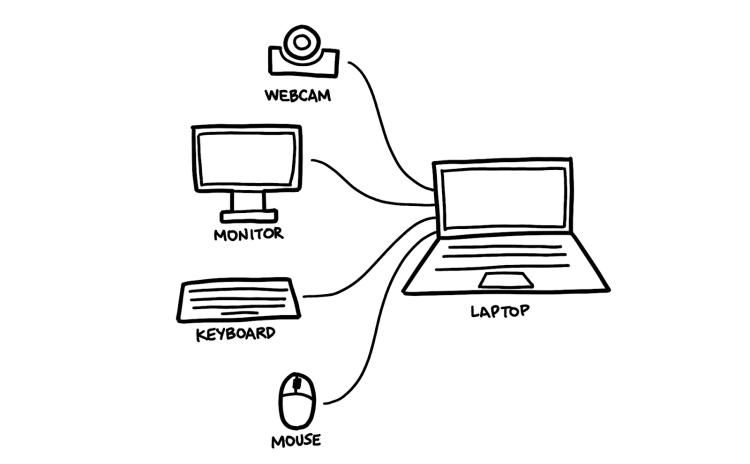 The equipment for this setup:

This setup replaces using the Obs software with a dedicated hardware streaming box as the centre of the setup. Into this box is plugged the microphone and webcam which will capture what happens in the room. The laptop is still plugged into a monitor, but the HDMI signal is split so that in addition to going into the monitor, it is also captured by the streaming box.

A streaming box, like the Epiphan Pearl, can handle both recording sessions, as well as acting as a web server so that anyone on the same network can stream the session at their desk, or it can be piped through to an observation room. This removes the reliance on a good internet connection for viewing to work.

By decoupling the test device (the laptop) from the recording/streaming setup, it is much easier to recover from things breaking without having to redo the entire setup, and it becomes a more reliable setup for running studies.

This setup also adds one or two dedicated condenser microphones, which can be positioned close to the participant, ensuring that the audio from the session is captured correctly and that details from the session are not missed by viewers.

By using a dedicated mobile testing sled, such as Mr Tappy, the video feed from a phone is much improved. The sled attaches to the phone with magnets, allowing the participant to pick up and move the phone as they normally would while the video feed continues to be captured from the device. The sled can also be used without being attached to a phone to capture overhead shots when appropriate for other studies — for example when running card sorts or looking at physical prototypes.

A version of this setup was used at the Home Office, and they have helpfully shared how this was put together. Their setup is documented on github here, and goes into a lot more technical detail.

This lab setup will enable regular lab sessions to be run with minimal technical overhead, allowing researchers to focus on the other aspects of preparing for a study. However, there are always ways to improve…

Over time, it will become apparent that some aspects of the lab setup are causing issues or creating duplication of tasks that can be optimised. There are many ways a lab setup can be improved, and almost infinite money could be spent on doing so. Some of the areas a team might consider include:

All of these offer the potential to improve the quality of the participant experience, reduce the administrative burden on researchers, and reduce the potential for failure, which will remove distractions during the study and make finding information from users easier. However, one of the most impactful areas to work on is improving the experience for observers.

The reason researchers are paid to run research studies is to inform decisions being made by the organisation, and researchers are rarely the people who have the appropriate authority to make those decisions. This makes communicating what a researcher has learned from their studies the most critical part of their role. A researcher will apply a whole bunch of methods to make research a team sport, but one of the most powerful is exposing decision makers to participants directly, by streaming the sessions.

In the budget and middling lab setup, a method of streaming the video from sessions was described and asking people to watch at their desks is always an option. However, watching sessions at a desk is not a great experience for the observer — there is a lot of potential for distractions. It is also a very lonely experience, and there are limited opportunities to discuss, reflect upon and improve the viewers understanding of what they have seen.

There are a variety of methods that can be applied to improve collaborative practise with observers, however having a good observation space makes this a lot easier. The observation room is another dedicated room, close to the research lab and could feature:

By creating a good atmosphere for viewing the research sessions, it will encourage increased attendance, focused attention, and collaboration amongst observers. This will make the researchers task of communicating the findings later much easier because people will be familiar with what occurred and will find it easier to believe and act upon the conclusions.

More information on building a collaborative research practice can be found in ‘Building User Research Teams’.

Thanks to Caio Braga.